Ghost Hunting With The HIDIOT

You may have seen ghost hunters on TV, investigating paranormal activity (or like us, you may have heard it from hiding behind the sofa while the programme's been on). Did you know that you can use your HIDIOT to build the same type of equipment that ghost hunters use to track down bumps in the night? This battery powered halloween project is easy to build within 30 minutes, and is great for kids and adults. Ghost hunters use EMF meters as an essential tool. According to the Anomolies Research Society, indicators of paranormal activity include fluctuations in EMF detection readings and background readings that drop or spike for no reason, with no explainable cause.

We’re going to build an EMF detector, so we’re building our own analogue sensor from scratch. We’ll also look at how we can use Digital Signal Processing (DSP) techniques to improve our detector. Once we have a working prototype, we’ll make it mobile using a USB charger.

How an EMF detector works

EMF detectors measure electromagnetic fields generated by alternating current - the type of electricity found in your TV, PC or any mains-powered device. The current alternates 50 or 60 times a second (depending on where you live) and EMF meters detect the associated change in electromagnetic field.

If you’ve ever heard a low pitched hum from a power supply, this is the electromagnetic equivalent of that hum.

Building our own sensors

In our last blog post we looked at how we could use a photoresistor in series with a fixed resistor to detect light and dark. In this project, we’re going to do something very similar. While you can spend a lot of money on EMF sensors, we’ll build our own from scratch. Normally EMF is measured in milligauss, but like the photoresistor, ours is just a rough, uncalibrated measurement. It’s certainly good enough for hunting ghosts on halloween.

Our final circuit should look something like this. We’ll walk through this below.

We’ll use the HIDIOT’s Analog input A1 (also known as PB2) as our sensor input, just like we did with the light sensor project. For our EMF detector we’ll use 24 AWG wire as our antenna. The longer the Antenna, the more sensitive the detector. If it’s too long, it’ll start detecting us! It’s easier to trim a long detector than try to lengthen a short one, so be generous and be prepared to trim back once it’s working.

We’ll bridge our antenna to a big resistor connected to the ground pin. In our example we’re using a 1 Megaohm resistor, but if you have anything bigger that’s fine too.

Finally, we’ll power it using a USB battery charger. This will let us take our HIDIOT around with us. I’m using a HooToo Tripmate Mini as a charger because it’s what I had lying around, but any charger will do.

When it’s finished, your EMF detector should look something like this: 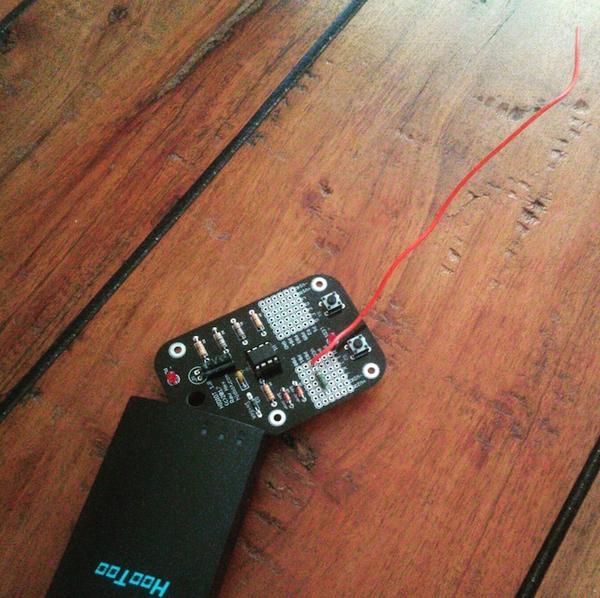 Unlike our sensor project, we’ll use the breakout area. Lets take a look at the breakout area in a bit more detail first. Don’t worry if this looks slightly confusing, it’s actually really easy to use! 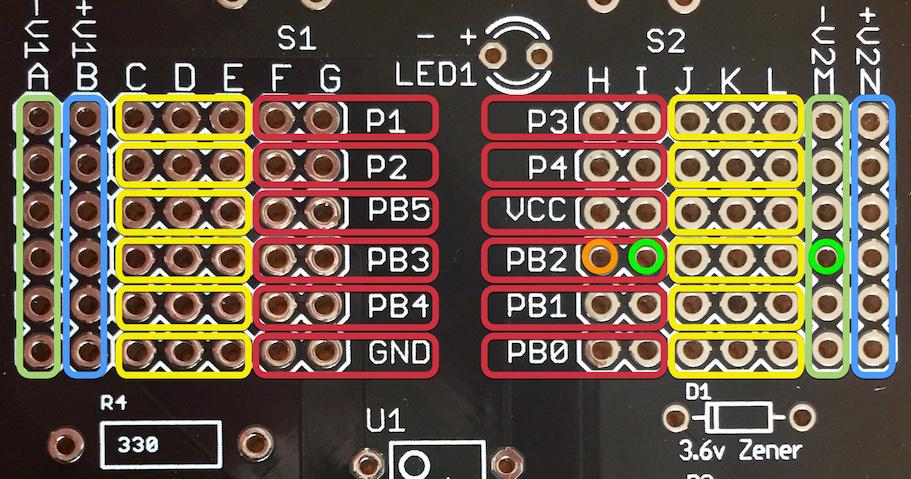 The photo above shows the HIDIOT’s breakout area, and the different coloured sections refer to different sections of the breakout. Each column is given a letter from A to N to make it easier to work with, just like on a breadboard. Each row has a name too. So if we say, row P1 and column G, you we’re referring to the pin closest to the P1 text.

We’ve drawn coloured circles around the pins that you’re going to use, you can see them on row PB2 and columns H, I and M. H is used for the Antenna, and I and M are used for the resistor.

The coloured rectangles show how the pins are linked together. For example, all the pins in column A are a negative power rail. Column M is a negative power rail on the other side of the board. Columns H and I are linked together for each row. So when we solder our antenna to column H on PB2, and one resistor leg to column I, we’re actually linking the antenna to the resistor. We call these links bridges.

We’re using 24 AWG wire as our antenna. The longer the antenna, the more sensitive the detector, but if it’s too long it’ll start to pick up interference from our bodies. As most of you reading this are alive, this is probably not what you want when ghost hunting. We’ll start at 6 inches, or 15 cm long, and then trim the antenna back once we know everything is working.

Start by trimming one end of the antenna with a pair of trimmers, then solder the trimmed end to column H on row PB2. Trim the other side of the board with some snips.

Take the resistor and place the legs through columns I and M on row PB2. Fold the legs back just like you did when building your HIDIOT, and solder them in place. Now it’s time to start coding.

We’ll use the code from our light resistor tutorial to type the values out on the keyboard. Make sure you have a text editor open when testing the code or your HIDIOT will type numbers all over the place. Our EMF detector is completely uncalibrated, so unless you’re going to spend a lot of time with expensive equipment calibrating it, don’t use it for anything other than ghost hunting.

Testing it all works

We can reuse the code from the light sensor tutorial and it should all work fine. We’re reading from A1/PB2, and typing the value out. You might want to change the delay to something like 1000 or 500 milliseconds as EMF values tend to fluctuate a lot. In case you don’t have the code saved, here it is below.

If you find that the light comes on when you put your hand near the HIDIOT, trim the antenna a little and try again until you’re happy that your hand isn’t interfering. Try pointing the antenna at screens or mains-powered speakers to trigger it.

If we’re going to make this portable, we won’t need the keyboard routines. Instead, we’ll use the LED on PB1 to tell us when there’s something strange in the neighbourhood.

Compile and upload the sketch onto your HIDIOT, and plug it into a USB battery charger. Hopefully you should see the LED flicker when it’s close to an EMF source.

The flickering is ok, but it’s not really a great indicator of EMF strength. If we take a bunch of samples and calculate an average, we can smooth out the signal a little. We can use a long integer to hold the sum of our sample values and divide them by the number of samples taken to get a mean average.

You might find it’ll still flicker at different points, but generally it shouldn’t flicker as much if you hold it in one place.

Now you have a working EMF meter, you can plug it into a USB battery charger and take it with you and map out electromagnetic fields around your home and in your neighbourhood.

According to ghost hunter Brian Harness, to use an EMF meter to detect paranormal activity:

Start by scanning the area you are investigating with a swaying motion that starts from side to side and finish with an up and down motion. Do this in a gentle even pattern. Do not jerk the meter, or move the meter to fast. This will give off a false reading.

Harnois also suggests that you take into account your local power sources:

EMF meters are very sensitive to power sources and will register such things as televisions, stereos, microwaves and power lines. The EMF meter will even register your camera if it is to close to it. The most important thing is to be aware of your surroundings before thinking that you have just detected paranormal activity.

You might’ve noticed that there are a lot of similarities between our EMF detector and the light sensor project. Averaging out samples is a form of Digital Signal Processing (DSP), which is used in everything from sound systems to spacecraft.

If you want to go further, try taking our light sensor tutorial and applying the average reading functionality to it. You can test that it works by using it in a darkened room with a candle. The flicker of the candle will make for really variable values, but by taking an average you’ll get a better overall view of light and dark in a room.

Another way to make the battery last longer is to use the tact switch on PB0 to trigger the sensor read, but to otherwise sleep the HIDIOT when not being used. Sleep is a complicated topic that we’ll cover another time, but you can find some more info on using the tact switch in our documentation.

Although there’s some debate on whether or not ghosts are real, one thing that is real is electricity, and it can kill. Make sure that when you use your EMF detector, you do so safely. Keep it dry, and don’t make contact with electrical terminals, even if you’re registering no activity. Our EMF meter project is uncalibrated, and not always reliable. You might not be afraid of no ghosts, but stay safe and make sure you don’t become one.

If you’ve enjoyed this project, sign up for our mailing list below. There’s new projects being released all the time, and you’ll hear about them there first. Just sign up below and get project ideas, tips and tricks from us about once a week.